When you&rsquo;re looking to move abroad, you n 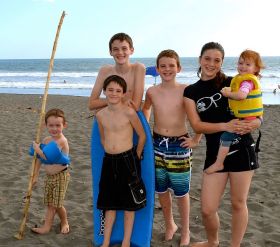 When you’re looking to move abroad, you need to correlate the amenities that the place you’re looking at has with the amenities that you’d like to see every day. For example, if you want it to rain like Seattle, then move to a place where that has rain similar to Seattle. If you want to experience a dry climate like Wyoming, then you would want to move to a place that has a dry climate like Wyoming. If you wanted a place like Kentucky that has four true seasons, you’re going to want to move to a place that experiences four true seasons.
In Panama, we don’t have four true seasons- we have a rainy season and a dry season. That means we experience six months of relatively dry weather, and six months of relatively rainy weather, all of which exist in a temperature of your choosing based on the elevation, because we’re so near the equator here in Panama.
Where I live here in Panama, at 4,600 feet elevation, it’s 74-78 Fahrenheit nearly every day of the year. At night, it’s usually 55 Fahrenheit, although I’ve seen it at 46 Fahrenheit. It’s just perfect for burning a fire on the colder nights. Then you experience an eternal spring every day of your existence, which was attractive to me.
We were happily surprised by how nice the people are here in Panama. As an example, when you’re standing in lines in the United States like in Wal-Mart, people don’t talk to each other anymore. Here in Panama where I’ve got a young family of six children, people are always taking the time to talk to us and ask us where we’re from, and about our children.
We do have one child now who was born in Panama and hearing about it just lights Panamanians up that we’ve been here in the country long enough. We’ve been pleasantly surprised with the engagement of the people. People are genuinely interested in you.
(The beautiful Gilbert Children, all six  of them, enjoying the beach in Panama, pictured.)
xxx