Santa is alive and well, in Panama 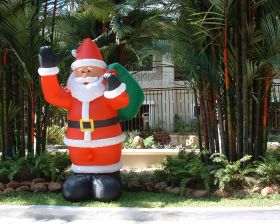 In 2006, on an early trip to Panama, I encountered Santa, Frosty the Snowman, and some other seasonal icons in front of an apartment building in Panama City. I stopped to say hello to them and to record with photographs my good fortune at having the pleasure of making their acquaintance. While engaged in the process, I noticed a Panamanian frantically waving his arms at me from the other end of the property. We walked towards each other, I very curious to see why he was so excited. Perhaps he had heard that I was coming to Panama and wanted to invite me to a dinner in my honour. Maybe the President of Panama would be there, dozens of beautiful Panamanian women, television cameras and magazine photographers, all wanting to help make me famous.
Alas, the man merely wanted me to desist from taking photographs. He was, he explained, head of security for the apartment complex, and he didn't have the authority to grant me photographic privileges. He would have to make a call to someone else to get permission. He did. A short conversation over his cell phone ensued and soon, after he shook my hand and wished me well, I was busily snapping away again. 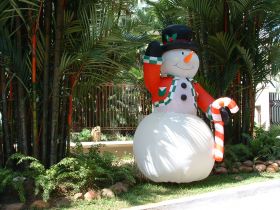 Security is taken very seriously in Panama. The government wants visitors to feel safe. Property owners want their tenants and guests to be secure. There is a lot of hype about how dangerous things are in Central and South America. In my limited experience though, I think it is safe to say that in most areas of Panama one is in no more danger than one might be in Toronto, Chicago, or New York. It mostly depends on where you are in the country, just as it might be said about the U.S. and Canada.
As I said goodbye to Santa, wishing him well on his coming rounds, he asked me to tell everyone I knew that his sack was full of all the things on everyone's Christmas list, and that they were really, really good, he would deliver them on Christmas Eve.
That was 2006.  These days, Santa and I aren't on speaking terms.  I still don't have a Porsche in my driveway.  There is still no sign of world peace.  My hair, whatever there is left of it, is getting whiter by the day.
I am sure though, that the rest of you are still on Santa's 'good' list. Remember . . .  he knows when you are sleeping, he knows when you're awake, he knows when you've been bad or good, so be good for goodness sake. So, be good, hear?
Merry Christmas!

Next Darién, rainforest reserve in Panamá.